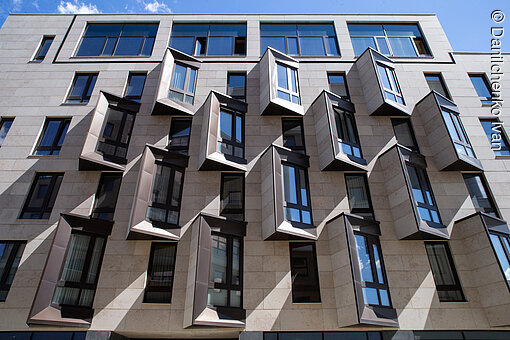 On the river side, the outer structure is divided in three straight-lined sections, whose balconies with floor to ceiling windows offer a spectacular view to the residents.

Angular protruding windows loosen up the look of the façades in the side streets.

Over 7.500 m2 of VeroStone Jura Beige with a thickness of 3 cm were used for the exterior façade.

The slabs, produced according to cuttings lists, have varying sizes up to 199 x 100 cm and received a honed surface. Thanks to the light and warm color shade of the Jura Beige natural stone, the façade of the new building blends in perfectly into the existing overall picture of the water front.

Rest area for walkers and hikers